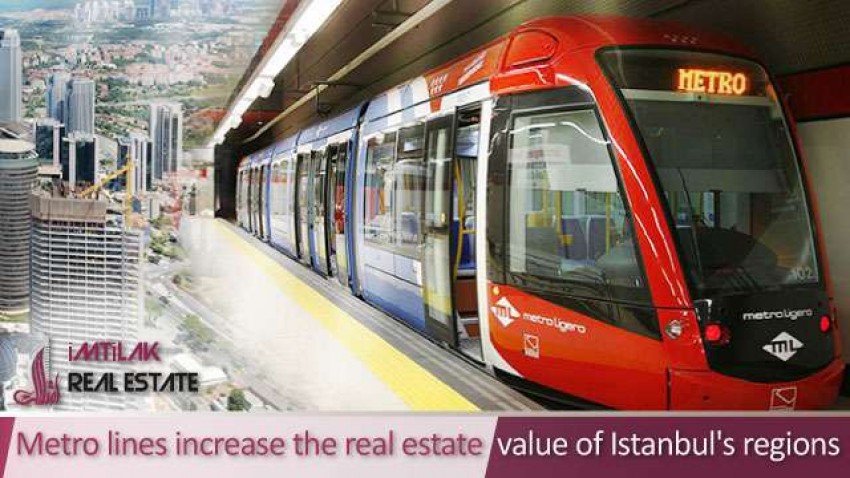 Metro lines are considered the easiest means of transportation in the city of Istanbul, just like the way it is in the other mega-cities in the world. However, Istanbul is experiencing a great interest in expanding the metro line networks, on both the European and the Asian sides of the city. These metro lines play a key role in the evaluation of the areas they pass through, raising up the prices of the real estate’s significantly.

Today, there are a lot of metro line projects under construction, and observers expect them to contribute, in a great deal, to raise the value of the areas they are going to serve, especially after the completion of construction and entering service.

The most important of these lines are:

- First: Mahmoud Bey - Esenyurt Metro Line: It will be held in the European side of the city, serving the following districts: Bağcılar - Küçükçekmece - Avcılar - Başakşehir - Esenyurt. This metro line is planned to share Istanbul metro line in Mecidiyekoy station, and it is expected to enter service within three years, the thing that will highly contribute to raising the value of properties in the areas it passes through.

- Third: Bağcılar - Küçükçekmece Metro Line: It will be held in the European side of the city, consisting of 9 stations with 9 kilometers route length. Passing through Halkalı district will gain this metro line an exceptional importance as this area is classified among the emerging real estate areas in the city. This metro line is planned to be completed in three years, and it is expected to increase the real estate value of Bağcılar and Küçükçekmece districts.

In the Asian side of the Turkish capital, many metro lines are under construction, including:

- Second: Ümraniye – Göztepe Metro Line: This metro line will be of 13 kilometers route length consisting of 11 stations, and it will play an important role in raising the real estate value of Ümraniye, Göztepe, Ataşehir districts. Ataşehir, anyway, is one of the most important areas in the Asian side of Istanbul in terms of the spread of modern real estate projects in it, and having the metro line passing through will, no doubt, increase the real estate value in the area.